It has been requested that I post about Christmas.

It has been requested that I post about Christmas.

The caramels that I make everyone for their Christmas present were a bitch this year to make. At first, once I was done, they WOULD NOT harden. I kept them on high for a long time, but they were just a thick goo after cooling. So i decided to split off half the goo into a smaller pan, which allowed it to get to higher temperatures. I guess my shitty electric stove is just not putting out enough watts to do a whole large pot at once anymore. Anyway, I ended up OVERcooking them, which made them extra hard this year. They're supposed to be soft caramels, but this time they were more like the kind you'd buy in the candy aisle of a grocery store. Hard, hold their shape, etc. They were a BITCH to cut up. But everyone really liked the way they turned out. Meh.

Went to my sister's Christmas Eve. Was generally a good time. Had fun hanging out with my nephews. My sister and her non-husband husband got caramels for me for Christmas as per usual. She got me a case for my new phone. Being that my phone is on her plan, and she was the one who put in the order for it (though I paid), she somehow ordered the wrong model of case. Which meant I had to go to their place again the following week to get it, which I did. The younger of her sons kept asking about me every single day after I'd left Christmas Eve, and he was very happy to see me again. They both were. It's nice to be missed.

The drive home from her place Christmas Eve was fucking nuts. There was so much fog I could only see 2 of the dotted lines on the road ahead of me at once. Which is 20 feet total view distance. The first half of my normally-an-hour-ish drive home was what my father would refer to as "white knuckle driving." It took me like an hour and 45 minutes to get home. But that first half was equal parts scary and awesome. Driving alone on winding roads in the middle of nowhere that have a 55mph speed limit, with nothing on either side of the road but fields and nature. It felt like I was trying to drive through Silent Hill. Every intersection when the lines on the road disappeared, I had to just hold the wheel still try not to veer off course. I relied more on my GPS for the shape of the road ahead of me than anything else. Every time a curve was coming up, I slowed down. It felt a bit like when you drive in a GTA or Saints Row game by just watching your minimap instead of the road itself. It ended up adding an additional 30 minutes onto my time driving home. Once I hit civilization, where there were street lights, and just...lights in general, it was easygoing. Especially once I had a car in front of me to follow.

I told my sister it was like driving in Silent Hill. She didn’t get that, so I said The Mist. Still nothing. Don’t understand how she can be my sister sometimes.


Christmas Day I went to my step-grandfather’s early, like usual, to help my step mother with all the food prep. My step sister’s son (who is less than a year old… don’t ask me when he was born, hah) crawled over to, and tried to eat some of the dog’s food. This is the nasty, wet, canned sort that looks like beef stew or something. He got two fistfulls of it before he was caught, and I cleaned it out of his hands in the kitchen while his mother held him. We weren’t entirely certain he hadn’t eaten some. His dad freaked out when we told him, but I explained that dog food sold in the U.S. has to all be edible by humans, due to all the homeless people who eat it. Not entirely certain that is true, or not, but I vaguely remembered hearing that. Regardless, it calmed the young father down, and the entire situation made me laugh quite a bit.

As far as my step brothers, they’ve switched places from last christmas. The younger one out of jail, and the older one is in jail. The younger one (the previous incest participant) did not come to the Christmas dinner, even though he was living with my dad and his mother. He’s been nothing but a big ball of drama since getting out of jail a few months back. Being off and on again, constantly, with the same girl I talked about this post last year. My step mother actually refused to let the girl live with them...once or twice. But has allowed it since. Even after she has cheated on him again recently, and tried to get him arrested and sent back to jail. It’s all a clusterfuck. He’s a needy clingy asshole who can’t deal with being alone, and she’s a total bitch who uses sex to get what she wants from him. Mostly, a free place to stay, and money to buy presents for her children. Honestly, lately, I’ve kind of felt like he’d be better off back in jail. He doesn’t know how to function. He had a job, but didn’t go to work during one of their off-again times, and got fired. Bleh.
Top

Re: It has been requested that I post about Christmas. 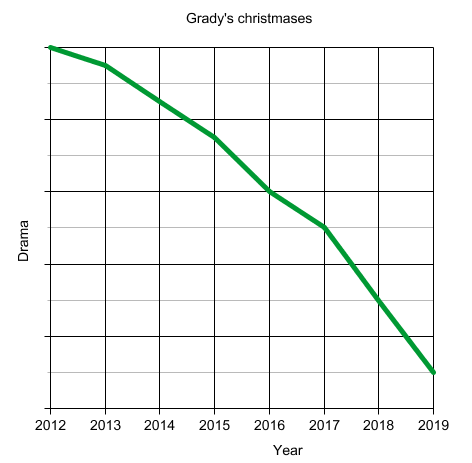 Re: It has been requested that I post about Christmas.

On one hand, yay, a Grady Christmas story! Those are always welcome.
On the other hand, I must sadly agree with Padre Juan -- there's a severe lack of jail time, incest and family drama in your story. Please fix that for next time.

Also, how are you doing Grady? Your health?

As for myself, nothing interesting on Christmas Eve or Christmas, which is unsurprising given that I'm a leftist atheist non-practicing Jew who hates God. As usual I was with my in-laws. Ate food, drank alcohol, went to bed soon after 12. Repeat for New Year's.

In other news my baby girl is 6 months old already! How the time flies. Also yesterday we accidentally dropped her on her head and had to spend many hours at the hospital making sure she was fine. Which she is, by the way. Though I've convinced myself the accident must have dropped her IQ enough that she won't qualify for commander of the mission to Mars, as I had hoped, and will instead have to be satisfied working the counter at a Starbucks. The world needs Starbucks employees, anyway.
Top
Post Reply
3 posts • Page 1 of 1